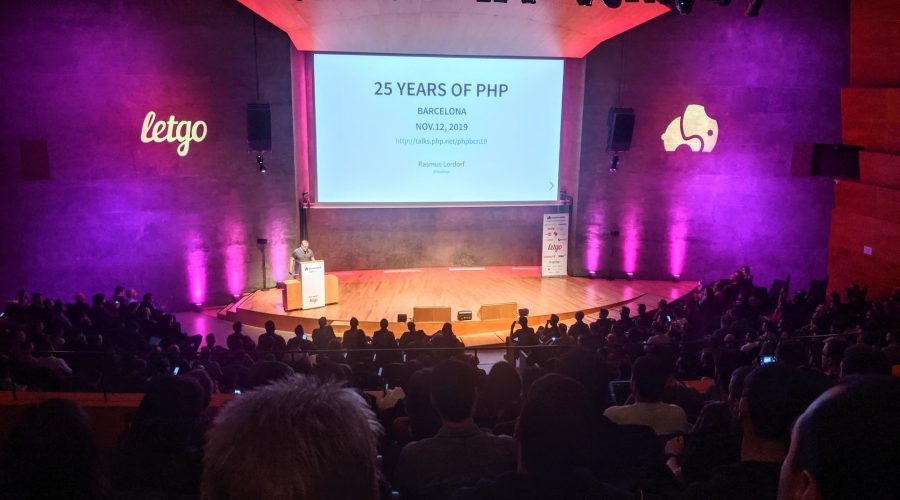 I’m lucky enough to have just attended the PHP Barcelona 2019 conference. The organisation is now uploading all of the talks to Youtube. My idea here is to give you some orientation on what things are worth watching in my opinion.

It’s a pleasure to attend to a talk by the person who started PHP now that it is a 25-year-old language. Rasmus walked through the story of himself –including a lot of personal photos– and PHP. His talk gave insights into some of the defining characteristics of the language:

Overall, the whole idea of PHP was to make a language as stupid as possible. Or, as he rather puts it: “stupidly simple”.

He then showcased some of the new features that are coming in PHP 7.4. You can see more about that on php.net. As I am quite a fan of the null coalescing operator (I even wrote a post about it), my personal pick is the new null coalescing assignment operator which is going to save us a lot of space in our code.

The end of the talk was marked by an inspiring example of an application built with PHP. He showed a tool to locate people and resources in emergency situations like natural disasters. He then exhorted the audience to build things that matter.

Rasmus insisted on the idea that he doesn’t like programming, but giving solutions to problems. It was connected to that the he gave the best quote in the entire PHP Barcelona 2019 conference:

I don’t care about people ranting about how bad PHP is or how stupid I am… on their WordPress blogs.

PHP Barcelona 2019 also featured to a talk by Nikita Popov, probably the most important contributor to PHP these days. He gave a very interesting presentation on how to optimise performance, building up on some of the concepts regarding Opcache that Rasmus had explained before. You should definitively watch the entire talk, but here are a few takeaways:

The talk by Derick Rethans (known among other things for being the creator of Xdebug) was absolutely fascinating. It gave a lot of insights on something that we don’t usually think about: How does the machine actually process our code?

Derick showed how the compiler parses and translater your code into bytecode (called opcode in PHP) in a very clear and mind-blowing way. The talk title was ‘It’s all about the goto’ and my favourite slide of the presentation shows why that is, indeed, the case:

As you can see, the first snippet is a super-simple for loop. The second is that same loop rewritten with goto statements. (Note: this is just for explanation purposes. If there is a well established principle in programming is that the goto statement is harmful. Please never use it)

The box at the bottom is a visualisation of the actual bytecode that the loop generates. If you pay attention, you’ll see that it closely resembles our goto version of it.

That is one of the best presentations on how code actually works that I’ve seen, and one of my personal favorites of PHP Barcelona 2019.

The insights given in this talk by Thijs Feryn were absolutely remarkable. Feryn, who works for Varnish, showed how you can do amazing things in the caching layer, removing a lot of workload from your application servers.

He first went through more basic stuff (making sure that you’re application stops processing a request as soon as it fiends a valid cached version; serving as much cached content as you can by retrieving small dynamic sections –like a header with user info– from generally static pages via AJAX or Edge-Side Includes).

However, the truly amazing things were in the second half of the talk. He showed how to use Varnish with VCL configurations to cache things you thought you couldn’t cache. For example, if you already have validated a session token, you can store that at the cashing layer without having to make a time-wasting and resource-consuming call to your main application server. Or, you can use Varnish to fill in directly to fill template files like .twig. Truly magic, heh?

Well, it’s not magic, but it’s also not free. If there’s something that upset the audience is that it was only after showing us those jaw-dropping possibilities that he told us that they were only available on the enterprise version of Varnish. Hey, I have nothing against promoting your products, being this a conference for which tickets we all had to pay a fee, you should be upfront and transparent about it from the beginning.

Chris Riley spoke about security adding a very personal perspective to the matter. His first advice was to simply forget about lists like OWASP 10. The problem with lists is that, after going through all its items, you can feel that you’re alright without considering which may be the biggest threats. For example, social engineering is not, and cannot be by their very nature, part of any list.

Instead, Riley draw an analogy with a nuclear power plant. When designing a reactor, what you do to make it as safe as possible is considering which things can go wrong to make it fail, identifying single points of failure and possible error combinations.

I think it was a very refreshing approach to security and a very common sense way to think about it.

There were two topics that acted as the leitmotiv of many talks. They represent two buzzwords in the height of fashion: asynchronicity and microservices.

I should probably write a full post on using PHP asynchronously. Personally, I don’t think it’s a good idea or even necessary at all.

As we’ve seen, PHP is synchronous by design. Swoole and ReactPHP don’t do anything that languages that are asynchronous by design, like Node.js can’t do. In fact, all of the talks that covered the subject mentioned that you could do this or that just like in Node.

And besides, they are so different from any standard PHP application that migration is impossible without having to rewrite the whole codebase. There is no inherited advantage in using PHP.

Anyway, if the concept interests you, you’ll probably like to check out the talk by Albert Casademont, “Supercharge your apps with ReactPHP & PHP-PM”.

Oddly enough, php.barcelona 2019 also featured a talk about Go (Golang), given by Kat Zień from Monzo. I would say that if you need an asynchronous app, using Go is a far better option than forcing PHP into it.

One of the most remarkable facts given in this talk is that Monzo is built entirely on Go. And it’s working with more than 1500 microservices. That sounds like too much, and it brings us to other common topic among various of the presentations.

Microservices. The good, the bad and the ugly.

A few talks explored the topic of microservices in PHP, another trending topic in the software development world nowadays.

Enrico Zimuel, from Elastic, gave a very explanatory presentation which started with a very good overview on its pros and cons. There’s probably nothing new there, but it’s probably a very good consideration to make when making architectural decisions, instead of picking just microservices because it’s the word of the day.

He then showed examples of a ride sharing app written in PHP (with Swoole) using microservices, which you may like to watch if you are considering this kind of application.

No matter which architecture you choose, a few points make a good watch for any PHP developer, particularly those about applying PSR-7 for HTTP transactions.

A great talk on microservices was Anthony Ferrara’s, “Microservices gone wrong”. He basically brought some common sense back into the topic, highlighting facts that should be obvious, e.g. http calls to a service are unreliable while function calls inside a monolith are never expected to fail.

Ferrara, who is nowadays engineering manager at Facebook, based his talk on personal experience and it surely constitutes good watching material for any developer working in a modern system.

My personal takeaway from it was this: if you are going to make microservices, make them as big as you can. It’s always easier to split them than to combine smaller services together.